The sequence of steps in binding hardcover books is shown in Figure 6-1. These steps remain the same whether books are bound by hand or by machine. 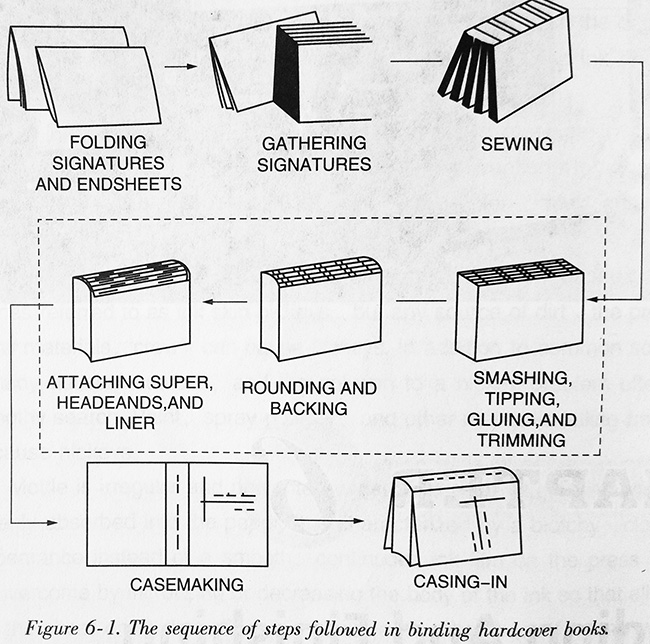 FOLDING SIGNATURES AND ENDSHEETS. Large printed sheets are first folded to form signatures. A signature is a single sheet of paper folded to a certain number of pages. For example, one signature may yield 8, 16, or 32 individual pages when it is trimmed on three sides later in the binding process.

Tow endsheets must also be folded for each book. An endsheet is a strong piece of paper that has been folded in half to make four pages. The size of each folded endsheet is the same as the book's signatures.

Endsheets are glued to the front of the first signature and to the back of the last signature. This process is called tipping and should be done after the signatures have been gathered and sewn. 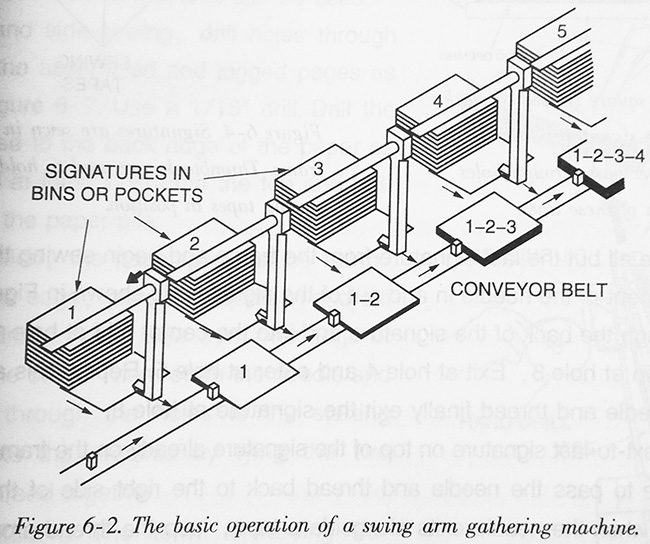 Center Sewing. Signatures can be center-sewn by hand or by machine. To center-sew by hand place a piece of plywood on each side of the gathered signatures. Jog the assembly so that the center folds of all signatures are at the same level and flush with the top edges of the plywood sheets. Insert the assembly into a vise. The center folds should protrude about one-half inch above the jaws of the vise.

Measure and mark lines for positioning three sewing tapes on the back of the signatures, Figure 6-3. Make each pair of lines the same width as the sewing tape to be used. 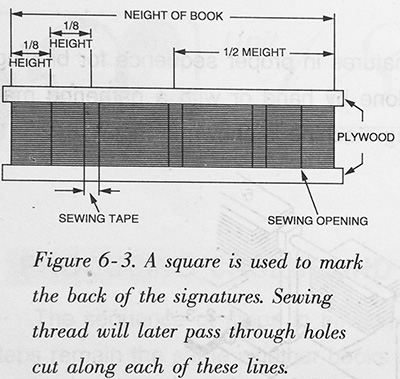 With a backsaw or a dovetail saw, cut into the back of the book. Carefully follow along the marked lines until the saw just begins to enter the inner part of each signature. Do not cut too deeply.

Remove the signatures from the vise and positon them on a sewing frame. Then fasten three pieces of sewing tape to the frame with thumbtacks as shown in Figure 6-4. 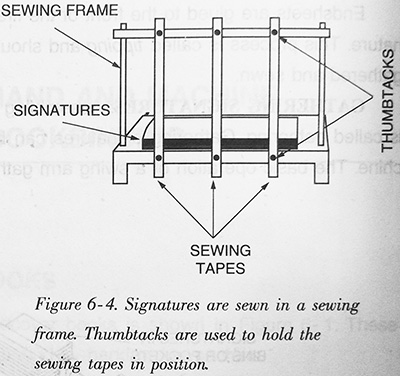 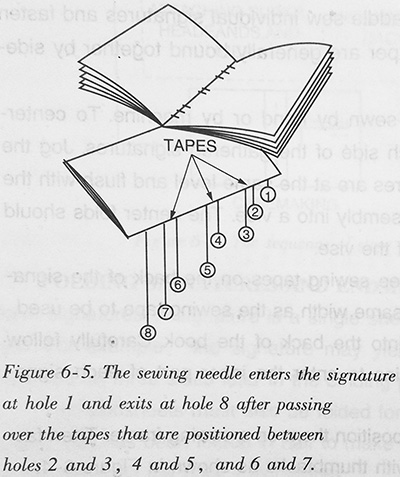 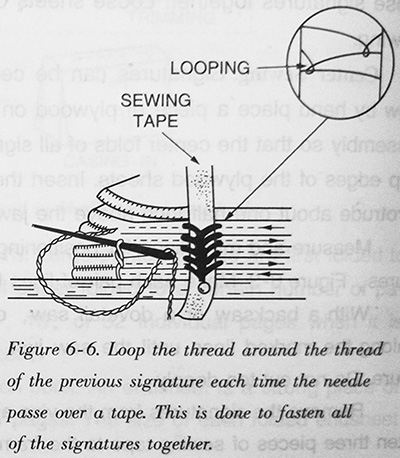 Repeat the procedure until all signatures are fastened together. Additional thread may be tied to the original length of thread if required. Each time your thread exits at the right, be sure to tie the end of the thread securely to the previous signature.

Finally, remove the sewn signatures from the sewing frame. Cut both ends of each tape so that they extend approximately one inch on each side of the bound signatures.

Side-sewing. Loose sheets of paper may be bound together by side-sewing. Again, either hand or machine methods can be used.

For hand side-sewing, drill holes through the side of the assembled and jogged pages as shown in Figure 6-7. Use a 1/16" drill the holes as close to the back edge of the paper as possible and at least 1/2" from the top and bottom edge of the paper pile. 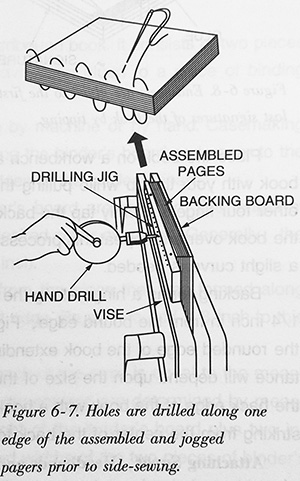 Once drilled, the paper pile can be sewn. Starting at one edge, pass the needle in and out through the drilled holes. Sew from one edge of the book to the other. Then return the needle and thread back through the holes to the starting point. Complete the process by tying the two ends of the thread together.

PORWARDING. The term forwarding describes a number of things to be done to a book before it can be enclosed in its cover. These operations include smashing, tipping, gluing, trimming, rounding and backing, and attaching super, headbands, and liner.

Smashing. Compressing the back edge of the book is called smashing. Smashing is done with a book press or vise. 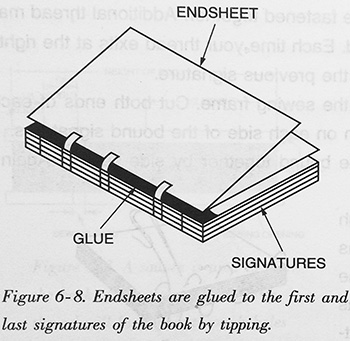 Gluing. Apply glue to the back of the book to help keep the individual signatures from shifting. Keep the signatures under pressure until the glue is completely dry.

Trimming. Use a paper cutter to trim a book to size. Trim the front edge of the book first. Then trim the top and bottom edges. Do not trim the back of the book.

Rounding and backing. Rounding is done to give the back of the book a slightly convex shape, Figure-9. 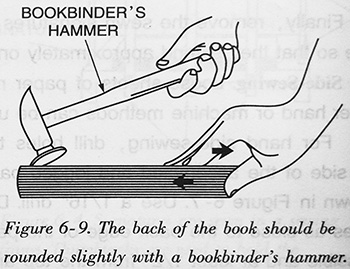 Place the book on a workbench and hold it as shown. Push on the front edge of the book with your thumb while pulling the outside pages in the opposite direction with your other four fingers. Gently tap the back edge into shape with a bookbinder's hammer. Tun the book over and repeat this process. Be sure to round the back of the book evenly. Only a slight curve is needed.

Backing forms a hinge along the front and back sides of the book about 1/8 inch to 1/4 inch in from the bound edge, Figure 6-10. Place the book between backing boards, The rounded edge of the book extending above the top edge of the boards. The actual distance will depend upon the size of the book and on the thickness of its cover. Gently tap the back edge of the book with a bookbinder's hammer, form the two hinges gradually by striking from the center of the back toward the outer edges of the book. Attaching Super, Headbands and Liner. A bound book with super, headbands, and liner attached is shown in Figure 6-11. Super is a gauze-like material glued to the back of the book. It provides added strength to the finished book. The super should be cut approximately 1/2 inch shorter than the book and about 3 inches wider than its back. 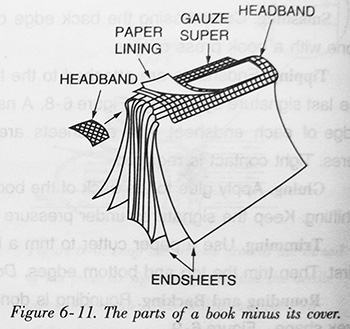 Headbands may also be glued to the back of the book. They are used to decorate rather than add strength to the bound material. Each piece of headband should equal the thickness of the back. Position the headbands so that the decorative portion faces the front edge of the book.

Kraft paper is glued over the super and headbands to finish off the back of the book. This piece of paper is called a liner.

Casemaking. The case is the cover of a hardbound book. It consists of two pieces of binder's board and strip of heavy paper that have been glued to a piece of binding cloth.

Casemaking, making the case, can be done by machine or by hand. Casemaking by hand involves cutting the materials to size, gluing the binder's board and paper to the binding cloth, and folding the cloth to cover the edges of the binder's board.

Cutting Materials to Size. Two pieces of binder's board are required. The length of each should equal the height of the book plus the desired cover overhand. Generally, the cover will overhang each edge of the book by 1/8 inch.

The width of the binder's board is measured from the hinge that was formed along the back edge of the book, by backing, to its front edge. Be sure to add 1/8 inch to this measurement to provide the needed overhang. 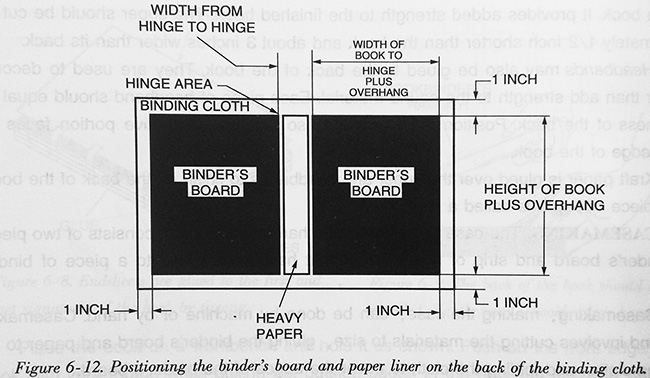 With a brush and bookbinding paste, coat the back of the book cloth. Cover the entire surface evenly. Do not leave any lumps of paste. Now carefully position the boards and paper liner on the book cloth. Then turn the book cloth over and squeeze out any excess paste from between the cloth and binder's boards. With a bone folder, press from the center to the outer edges of the boards. 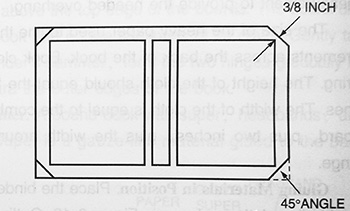 Hanging the book in the case is called casing-in. Casing-in can be done by hand or by machine.

To hang a book by hand, insert a piece of waxed paper between each of the endsheets. The waxed paper should extend beyond the edges of the book. Waxed paper prevents the endsheets from sticking together when the book is pasted into its case.

Apply paste to the super, tapes, and endsheet located at the front of the book. Position the book within the case, pasted side up, and close the front cover. Then turn the book over, open the back cover and apply paste to the super, tapes, and back endsheet. Now close the back cover. Be sure the book is pressed up against the back of the case and in its proper position. Readjust the position of the book if necessary.

After hanging the book, place it between two pressing boards. The metal strip on each board should be fitted into the book's hinge.

Place the pressing boards and book assembly into a book press until the paste is completely dry. The pressing operation is shown in Figure 6-14. When dry, the book can be removed from between the pressing boards. Clean off the excess glue as required. The book is now complete. 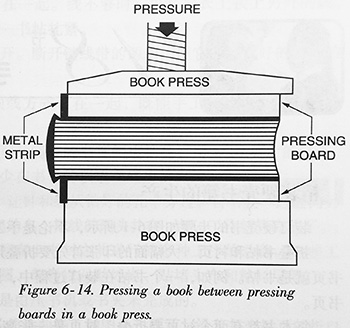